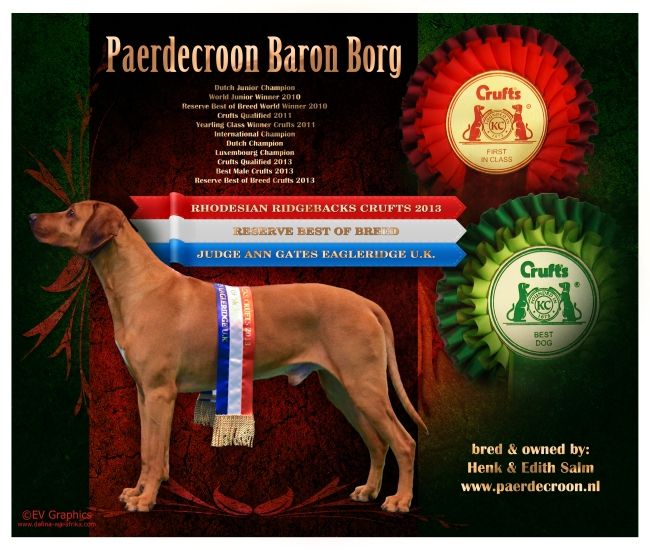 30 November 2013 / 1 December 2013 This weekend Zaxxon’s Delightful Davidoff met 18 of his sons and daughters born at Ridgevalley Kennel and Shayela Kennel. It was so nice that from both litters all were present. We had walks with all without any incidents. Proud Daaf has bought for their family a little choco present. Thanks Leon & Ilse and Natascha & Patrick for the invitations and being there!

12 October 2013. We entered the Bundessieger Show in Dortmund (DE) where our young sweet and so friendly girl Borg’s Nyne fan under de mune did again a great job. Nyne got the 4th place with Excellent in Junior Class.

6 October 2013. We are very proud to announce that today at the international dog show (69 entries) in Zwolle (NL) under judge Mr. R. Spörr (AUS) Aminiafu’s Hishima Henorr won the Intermediair Class and became BEST BITCH with CAC/CACIB and BOS. Borg’s Nyne fan under de mune (12 months) entered the Junior Class for the first time, from the start till the end with a wagging tail and smile on her face. Out of 16 entries Nyne gained a great 2nd place with Excellent.
Paerdecroon Divo Davinci (Basu) with Anne & Dick and Paerdecroon Diva Double Duchess (Fay) with Herman & Joke also entered the show ring in Zwolle today. Both in intermediair Class with Very Good; Paerdecroon Divo Davinci got a 3rd place. Well done you all!
28+29 September 2013. Paerdecroon Diva Dexx had her show début at the international show Maastricht this weekend. Although it was a bit exciting Diva behaved so grandly and was cooperating well in all. On both dates Paerdecroon Diva Dexx won the Intermediair Class with Very Good. After a long show stop Joyce entered the show ring again with Paerdecroon Diva Dolce and gained a Very Good on both days, with a 4th place on Saturday. Well done!

15 September 2013. Doppel Erfolg!!! RHEINLAND(jugend)SIEGER(in)! Paerdecroon Baron Borg and his daughter Aminafu’s Hishima Henorr what a dream team.
We are thrilled! Today in Krefeld (Germany) at the Rheinlandsiegerschau under judge Mrs. J. Melcior-Schlechter (LUX) Paerdecroon Baron Borg won the Champion Class with Excellent and became BEST MALE with CAC and the title RHEINLANDSIEGER. Borg’s daughter Aminiafu’s Hishima Henorr won the large Junior Class with Excellent with JCAC and the title RHEINLANDJUGENDSIEGERIN.

1 September 2013. No time to think about or feel an empty nest, because we went to Belgium to meet Zaxxon’s Delightful Davidoff’s x Inkululeku Jamilah offspring at kennel Inkulukeku. Thank you Guy and Odette Pauwels for the warm welcome and nice drinks and food. Davidoff behaved without any problem and so sweet, relaxed and easy in a large group of young and some adult dogs. Davidoff made friends with some ‘’strangers’’ and enjoyed it! Daaf is a golden dog.

30 August 2013 – 1 September 2013. All 11 Paerdecroon Emperors and Empresses left mum Puma, daddy Davidoff and us to live a lovely life with their new families. We are proud of that 5 families contacted us for a ”2nd Paerdecroontje” and 1 family who recontacted us after we were not able to give them a puppy some years ago. We thank you all for your trust in our kennel.

26 August 2013. Formal RRCN litter inspection. Paerdecroon E-litter – born 6 July 2013:11 puppies (5 females / 6 males) no DS, no kink tails, all correct bites. 10 puppies : correct ridge. 1 male : ridgeless. Happy HAPPY H A P P Y !!!
Thank you so much sweeties mum Paerdecroon Mumoja (Puma) and daddy Zaxxon’s Delightful Davidoff. Together with your 10 all correct puppies (born in D-litter 13 April 2012) with such amazing fine temperaments and growing to wonderful adults, you both are an extraordinary combination together. We are lucky to live with you and your daughter Diva.
24 August 2013. Today at the International Dog Show Rotterdam ”our” Paerdecroon Diva Double Duchess owned by Herman Nijhuis won the Junior Class and became Best Bitch with CAC afterwards. With this win this beautiful ‘puppy” of our Puma & Zaxxon’s Delightful Davidoff became Dutch Junior Champion!!!! yehhhhhhh!!!!!!
As her breeder we are very very very proud and our hug congratulations to Herman & Joke.
22 August 2013. Daddy Paerdecroon Baron Borg and we are very happy and proud of mum N’kanga, who gave birth to 8 wonders… 6 boys and 2 girl. Unfortunately 1 boy with DS/kinktail and 1 very small boy with cleft in palatum are put to sleep. Well done and hugs and congratzzz to help mum Kennel Nærleiken in Norway.

18 August 2013. Henk acted as aspirant judge together with 7 judges at the special Puppy Day of KV Waalwijk:110 entries / 52 !!! breeds. It was a lot of study to go through all breed standards on beforehand. Absolutely very instructive and again a big experience.
4 August 2013. International show Leuven (Belgium) under judge Mr. P. Iversen (NO) Paerdecroon Baron Borg won the Champion Class with Excellent and got the res. CAC / res. CACIB.

31 July 2013. With deep sadness we announce that so beloved Paerdecroon Munira (Pepper) went over the rainbow. We wish Hans & Marion lots of strength.

6 July 2013. We are happy and proud to announce that after a birth giving without complications we welcomed Puma’s & Davidoff’s 11 beautiful, strong, shiny and healthy Emperor & Empress babies on 6 July 2013. 6 Boys and 5 Girls. No kink tails. 10 nice ridges with 2 crowns and 1 Emperor has left his ridge in Puma’s belly. DS will be checked later. For further information please check menu Current E-Litter.
22/24 June 2013. All the way from Norway we welcomed Gro Rukan and her lovely N’kanga. Paerdecroon Baron Borg & Eisi N’Kanga d”Akinvoleezah had 2 successful matings. We cross all fingers and paws for a good pregnancy and healthy babies.

9 June 2013. May be a start and début of Henk”s judge career. As aspirant-judge Henk was invited to judge on the ‘’Jonge Hondendag’’ Beagle Club NL, and it went very well.
3 June 2013. We are incredible happy that the ultrasound confirmed Puma’s pregnancy. Puppies will be expected in the 1st week of July 2013.
1 June 2013. International Show Oss. Our sweet and lovely boy Kimani’s Mojo fan under de mune entered the Open Class and gained a 3rd place with Excellent.
25-26 May 2013. Paerdecroon Baron Borg and Aminiafu’s Hishima Henorr joined the Anniversary Show DZRR in Appel/Germany. On Saturday Paerdecroon Baron Borg achieved a Very Good in Champion Class and Aminiafu’s Hishima Henorr a great 1st place in Junior Class with Excellent. On Sunday Borg got a 4th place with Excellent and Henorr an 3rd place with Excellent.
19 May 2013. International Eastern show in Arnhem. Aminiafu’s Hishima Henorr won the Junior Class with Excellent out of a large number of participants. Herewith she obtained her 3rd JCAC and got the title of D U T C H J U N I O R C H A M P I O N. Furthermore Henorr got the reserve CAC. We are very very very proud on our Dutch/Norwegian girl. Together with her father Borg and half-brother Mojo, Henorr is the 3rd Dutch Junior Champion in Paerdecroon Kennel.
Our ‘girl pup’ Borg’s Nyne fan under de mune entered the Puppy Class and behaved like a full experienced show dog. Nyne got a 3rd place with Promising.
18 May 2013. This afternoon we and Davidoff met ‘’his’’ Kinaya again and her puppies with their new families. On initiative of Natascha / Kennel Shayela all were invited on N&N DogTrainers location to meet daddy Davidoff and to know which puppy will be a part of their family. We enjoyed it very much and lots of pictures were taken of daddy Daaf.
11 May 2013. Today at the International Show Dortmund (Germany) our stunning Paerdecroon Baron Borg became BEST MALE (50 entries) and BOS. Herewith Borg gaines the title VDH-Frühjahrssieger 2013. Well done dream team Borg & Henk.

7+8 May 2013. Succesful matings between Zaxxon’s Delightful Davidoff & Paerdecroon Mumoja (Puma). Fingers crossed for a pregnancy. Begin June we will know more after the ultrasound.

21 April 2013. Today at the International Show Zeeland Aminiafu’s Hishima Henorr was placed 1st in Junior Class and gained herewith her 2nd JCAC. Mojo was entered but not present, because Henorr is in heat, so they could not travel together.

7 April 2013. RRCN Offspring Day. Daddy Zaxxon’s Delightful Davidoff, mom Paerdecroon Mumoja (Puma) with 7 of 10 Paerdecroon Diva’s and Divo’s were present. Very very proud on all and their families. Great comments individual and overall. All ‘pups’ have lovely temperaments. General litter report ends with ‘compliments to the breeder’ which made me a bit emotional 🙂 Thanks all for your participation!

24 March 2013. Does Aminiafu’s Hishima Henorr follow her daddy Paerdecroon Baron Borg’s track?
Today at the International Show Leiden our Norwegian lady Henorr gained a beautiful first place in a busy Junior Class with Excellent/JCAC.
Furthermore at an age of 11 months Henorr became BEST BITCH with CAC & BEST OF BREED.
In the Junior Class Paerdecroon Divo Davinci (Basu) was awarded with a 2nd place with Very Good. Paerdecroon Dutch Duchess (Fay) gained a Very Good without placement. Both had wonderful words on their judge report.
Kimani’s Mojo fan under de mune entered in the Open Class and gained a 3rd place with Very Good.

2 March 2013. How proud, happy and over the moon you can be… as a friend, as a breeder and as an owner.
Today at the International Martini dog show in Groningen 62 Rhodesian Ridgebacks rocked the ring under strict judgement by Mr R. McCoy (Ireland).
At his first appearance Paerdecroon Divo Davinci (Basu) & Anne did an excellent job in the junior class. They WIN!….their 1st JCAC in the pocket!
Paerdecroon Carnelian Cardin (Mack) entered the intermediate class. Unfortunately it was not their day. Well done Ingeborg & Mack; keep on to believe in yourselves and next show new likelihood.
Kimani’s Mojo fan under de mune started for the first time in a very strong open class. Mojo WINS! Later on Mr. McCoy appointed Mojo to BEST MALE with CAC / CACIB / BOS!
In the junior class females (12 entries) it was absolute exiting. Paerdecroon Diva Double Dutches (Fay) with Herman entered for the second time on show. They WON! With CAC / CACIB / BEST OF BREED!!!! In 2 shows stunning Paerdecroon Diva Double Dutches (10 months of age) gained 2 JCAC and 1CAC, which is a dream result!
On Aminiafu’s Hishima Henorr´s first show Henorr gained a beautiful 2nd place in the Junior Class with excellent. Lovely and stunning Henorr did an amazing job.
The 2 daddies Zaxxon´s Delightful Davidoff and Paerdecroon Baron Borg, mom Paerdecroon Mumoja (Puma) and mom/grandma Ferra´s Chuma Mexx fan under de mune are smiling all the time now … ohhhh yehhhh…. WE TOO!!!! Special smirk at the pretty faces of Davidoff & Puma for their 2 kids Junior Class Winners.

5 February 2013. Kamnene Makena’s is confirmed in whelp. Zaxxon’s Delightful Davidoff’s puppies will be expected around 14 March 2013.

28/29 January 2013. Aminiafu’s Happy Ariel is inseminated; now we cross all Norwegian and Dutch fingers and claws. 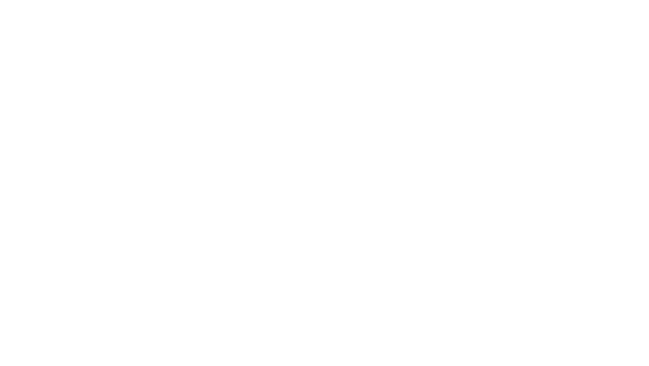